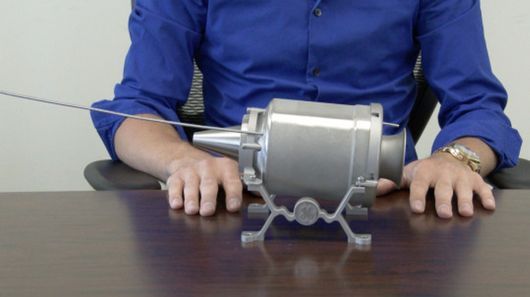 GE Aviation's Engine is Made Entirely Out of 3D-Printed Parts

Rahul Kalvapalle — May 14, 2015 — Autos
References: gereports & gizmag
Share on Facebook Share on Twitter Share on LinkedIn Share on Pinterest
GE Aviation has managed to build a jet engine using entirely 3D-printed parts. While this engine may not be powerful enough to power a flight across the Atlantic ocean, it's still an impressive feat of engineering that bodes well for the future.

This engine is a foot long and 8 inches tall, and was constructed at GE Aviation's Additive Development Center just outside Cincinatti. Admittedly a side project, the engine took several years of work to make, and the whole purpose of the project was to test the printing technology. This engine has been fired and revved up to 33,000 RPM.

The reason this engine features a fairly simple design has to do with the fact that the current state of 3D-printing technology doesn't allow for the creation of complicated commercial engines. Therefore, the engineers and designers chose an engine design more suited towards things like remote control model planes, and modified it so it could be manifested using Direct Laser Metal Melting printing.