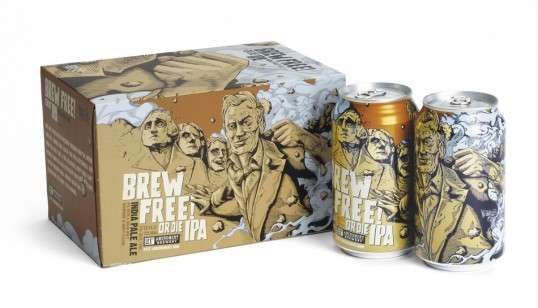 Branding and marketing a beer is a formulaic ritual that often uses scantily clad women in hopes of grabbing the attention of booze-guzzling brutes. However, the 21st Amendment beer cases are taking a different approach to get college kids to drink its suds. Playing on themes of patriotism and American pride, the beer company implements political icons and slogans such as “brew free or die!” to pull at the heartstrings of beer-chugging twenty-somethings. The 21st Amendment beer cases also make fun of American patriotism, with a beer called ‘Bitter American’, using a chimpanzee in a space suit to draw comparisons with the US-Soviet space races in the 1960s.

Regardless of how good this brew actually is, the packaging and branding of the product will surely be purchased by patriots and drunkards alike.
3.2
Score
Popularity
Activity
Freshness
View Innovation Webinars