Rethinking The Future
Next
Set of
Related
Ideas 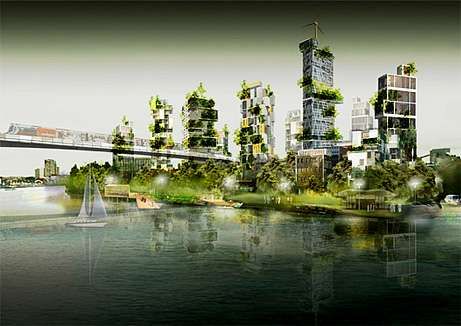 In the suburb, jungle-like tall buildings are no longer boring grey. Instead, they would be partly solar and wind energy powered, with gardens on the rooftops and plants around the windows, according to Paris-based design house Castro Denissof Casi.

In the town, people would enjoy more space for walking and bicycling since the car lanes would be narrowed, proposed by London-based Rogers Stirk Harbour & Partners.

And architect Antoine Grumbach would like to extend Paris to the English Channel in the future, simply by a high-speed railway from the heart of the city to the Channel’s edge at Le Havre.

Opening on April 30,2009 at the City of Architecture and Heritage museum in Paris, the exhibit, La Grand Paris, is encouraged by French President Nicolas Sarkozy, who aims to restructure Paris and its suburb to be both eco-friendly and sustainable.
4.4
Score
Popularity
Activity
Freshness
Get Trend Hunter Dashboard

Architecture of the Future
Under Water City Proposed for Amsterdam