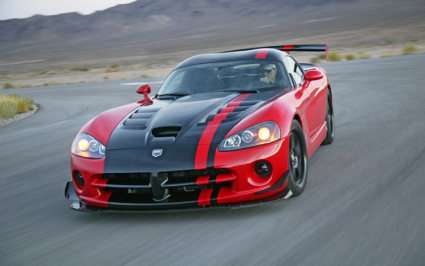 Production stopped in 1999, but as of its debut at next week's LA Auto Show, the 2008 Viper ACR will be back on the auto scene; production will start between April and June, and is expected to sell for under $100,000.

"Under the hood will be the standard all aluminum 8.4 liter V10," according to Inventor Spot. "It will produce close to 600 horsepower to the rear wheels and over 550 ft-lbs of torque. The package will also bring some aero-upgrades as well as suspension adjustments to cope with the 1.5g cornering is it said to produce."

"They were able to save a total of 40 lbs between upgraded tires and wheels, brakes and suspension components. Dodge will also offer a 'hard-core' package which will remove another 40lbs, along with your audio components some sound dampening and you trunk liner.

I'm shaking in my boots knowing I'll see its debut next week. I know it's silly for a tiny girl like myself to love these cars, but I just can't help it! Maybe it's the same thing men suffer from -- a need to express masculinity when there's a lack of muscle?
2
Score
Popularity
Activity
Freshness
Attend Future Festival Virtual