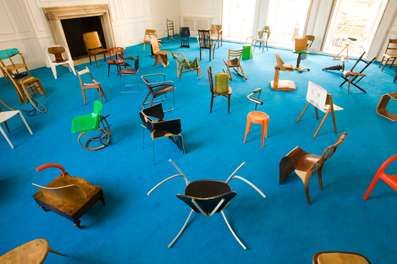 Bianca — March 15, 2008 — Art & Design
References: gampermartino
Share on Facebook Share on Twitter Share on LinkedIn Share on Pinterest
Designer Martino Gamper, who was born in Italy and studied sculpture and product design in Vienna, is one of seven finalists in the Brit Insurance Designs of the Year contest. The art project which resulted in his nomination under the furniture category, is called "100 Chairs in 100 Days."

Just as one might guess from the title, Gamper designed 100 chairs over a 100 day period, each piece unique, and most bordering on extremely bizarre. He deconstructed hundreds of chairs and seats and then put them back together in very different ways, creating a collection of very offbeat, one-of-a-kind designs. He even harvested a seat off a bicycle for a very bizarre piece, featured in the gallery.

On January 25, 2008, he released a book titled after the project. Some of his chairs are featured in this gallery; the rest can be seen in Martino Gamper's portfolio.
3
Score
Popularity
Activity
Freshness
Attend Future Festival