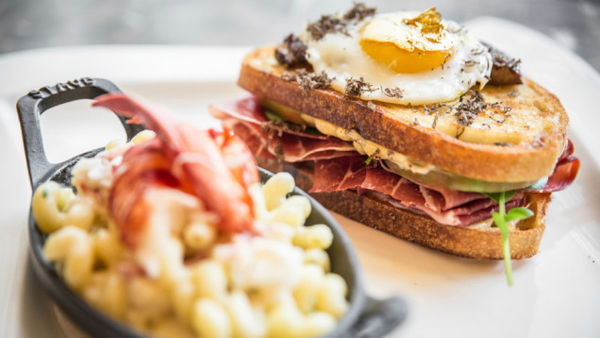 The Zillion Dollar Grilled Cheese is Exclusively for High Rollers

Vasiliki Marapas — April 15, 2014 — Lifestyle
References: eater & kitchenette.jezebel
Share on Facebook Share on Twitter Share on LinkedIn Share on Pinterest
In an effort to widen the gap between the have and the have-nots, Deca Restaurant + Bar is offering the 'Zillion Dollar Grilled Cheese.' Thanks to the Chicago eatery, what was once a humble, easy-going comfort food is now a pretentious, overpriced gourmet experience.

The remixed sandwich is actually a grilled ham-and-cheese sandwich. To further distinguish its upscale properties, the ham is described as being "sourced from pigs living primarily in the south of Spain, allowed to roam free in the pasture eating acorns until they are of proper size...then salted and air-dried for six weeks followed by a minimum curing process of 12 months."

Meanwhile, the most important ingredient -- the cheese -- is an aged (40 years, to be exact) Wisconsin cheddar infused with flakes of 24-karat gold. Insert eye-roll here.

This upscale bastardization of the classic grilled cheese is finished off with a white truffle aioli, heirloom tomatoes and 100-year-aged balsamic vinegar, served on an "artisan" (a word that's now completely void of meaning) sourdough bread. Though I can't deny it's probably delicious, I can't, in good conscience, spend $100 on a sandwich -- no matter its karat count.
5
Score
Popularity
Activity
Freshness
View Innovation Webinars