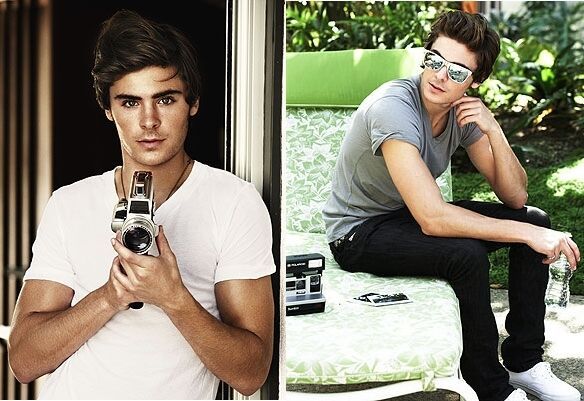 “The hardest thing about being young and being in the business is there’s no guideline, there’s no road map that you can follow,” explains Zac Efron. “You’re forced to adapt and learn to make your own decisions at a very young age, and if you don’t, that’s where you can mess up.”

And Zac Efron isn’t delusional about his current acting chops, “I’ve messed up countless scenes....I think I have a better sense of it, but I’m still discovering what it means to act.”

So who are Zac Efron’s idols when it comes to having a solid acting career?

“I would love to just sit down and talk with Leonardo DiCaprio and Johnny Depp and pick their brains about their early careers,” Efron says. “They do it because they love it, not because they enjoy being famous. You have to have good foresight and be really careful. If you don’t adapt and learn at a very young age, you can really mess up.”

Zac Efron is photographed in the photo feature by Ben Watts in a photoshoot that showcases the playful side of Erfon with skateboards, bicycles and swimming pool, and the maturing interospective side with a camera in his hand, a la Brad Pitt.
5.3
Score
Popularity
Activity
Freshness
Jeremy Gutsche Keynote Speaker