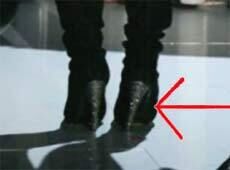 Jeremy Gutsche — September 13, 2007 — Pop Culture
References: trendhunter
Share on Facebook Share on Twitter Share on LinkedIn Share on Pinterest
Britney Spears haters everywhere rejoiced at her stumbling dance moves at the VMA awards. However, a fan has come to her rescue with video evidence that proves she had a broken heel. In fact, it looks like she did a reasonably good job to cover the fact, even though it meant her dance moves seemed sleepy.

In this video, you can see the detail with which Spencergaum, a YouTuber, has taken the time to re-cut the Britney Spears performance with close up zooms, slow motion and evidence that show her broken right heel. Fast forward to 2:20 if you want to see a good example.

The video notes, "Watch Closely: she stumbles a few times in the beginning of the performance. This is when she realized her heel was broken. Of course, she tries to cover it up by making it seem like part of the dance.

In short, even though we learned that YouTubers can help make someone a joke overnight, the community can also help to defend the humiliated.
4.2
Score
Popularity
Activity
Freshness
Get the 2021 Trend Report FREE