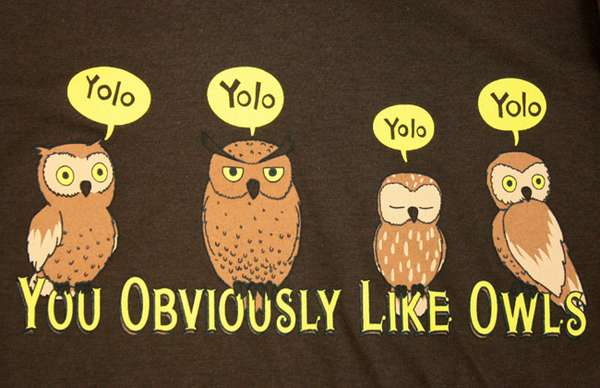 These 'YOLO' T-Shirts are Satirical Yet Appropriate

Proudly stating "You Obviously LIke Owls," the shirt is a satirical and of-the-moment fashion piece sure to catch on with YOLO haters and lovers alike. The statement, which was done to death, has already fallen victim to extremely harsh parodies on Twitter, but this is a more tactile and playful way of making light of the trend while still remaining ironic, considering the phrase came from a song by iconic rapper Drake, whose logo is an owl.

Being sold online by TopatoCo, the shirts are surprisingly high quality and are sold exclusively in the color brown. The illustrations of owls featured on the shirts are whimsical and adorable, and really do suggest that any viewer might like them.

Obnoxious JunkMail Graphs
The ‘Evolution of Spam’ Infographic is Sarcastic