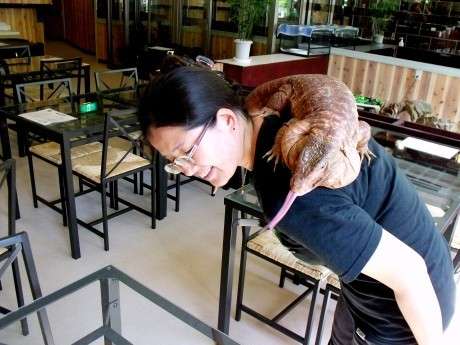 Meghan Young — August 21, 2011 — Lifestyle
References: inventorspot & neatorama
There are canine cafes and cat cafes (most of which are located in Japan), so a reptile cafe such as Yokohama Subtropical Tea could only be the natural next step. As far as cold-blooded tea shops go, this one is definitely the chilliest; clearly that doesn't just refer to the service but to its staff of lounging lizards and other reptilian creatures. Adorable, right?

Founded by 42-year-old Nagano, the Yokohama Subtropical Tea has been so well-received that some of its eclectic customers end up staying for hours on end. Considering that this tea shop hosts as many as 30 different reptiles and amphibians, that is not so surprising -- not to mention that the teas and snacks served would sustain these customers for days on end, if allowed.
1.5
Score
Popularity
Activity
Freshness