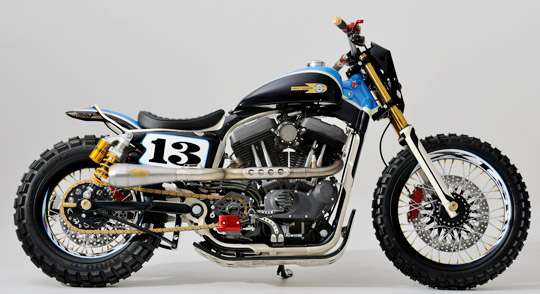 With a design based on the 2011 XL1200N Nightster, the XLST3 Sportster Tracker is also roughly modeled after 1970s dirt bikes. Giving it an old racer look are a chain and sprocket instead of a belt drive system, a push start button installed in the right side of the frame neck, gold Ohlins shocks in the rear suspension, fitted handlebars, and a seat and exhaust system handmade by Shaw Speed and Custom.

Overall, the XLST3 Sportster Tracker is a cool dirt bike with an amazing style and performance.
2.9
Score
Popularity
Activity
Freshness

Beastly Bikes
The 2010 Predasaurus Curve is a Scary-Looking Bicycle

Scandinavian Badass Bikes
Hogtech's Choppers are Made for True Vikings