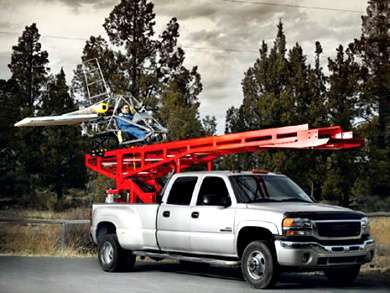 Propel Yourself Into Space

Trend Spotter — June 8, 2006 — Unique
References: wired
There is no subtle way to say this: Brian Walker plans to shoot himself nearly 20 miles into the air aboard a homemade rocket launched from what could be the world's largest crossbow. (Seriously.)

This isn't Walker's first outlandish invention. He's responsible for the â€œlight chaserâ€ whirly toy, a 300-gallon water-balloon launcher (for putting out forest fires â€“ still in prototype), and Taser gloves (featured in â€œGarage Geniuses Go Prime Time,â€ issue 14.03). But Project RUSH â€“ for â€œrapid up superhighâ€ â€“ is hands down his most preposterously dangerous effort. â€œI missed out on the opportunity to be the first private citizen to fly to the edge of space in a private rocket, so I decided to do something even more fun,â€ Walker says. (Wired)

54 Gigantovations
Oversized Things, From XXL Critters to the Nazareth Cross