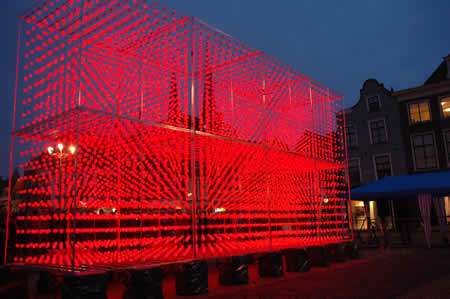 "The â€œElectrotechnische Vereenigingâ€, the association for students of electrical engineering from the Delft University of Technology (TU Delft), will reveal the world's largest 3D-display Sunday 23rd of April. The display measures 8 metres in width, 4 metres in height and 2 metres in depth and consists of a matrix of 8.000 LEDs with table tennis balls around them. This stunt is being organised because of the celebration of the 100th anniversary of the â€œElectrotechnische Vereenigingâ€ (ETV). The display will be revealed on Sunday at 9.00 pm local time on the 'Markt' in Delft." (Tudelft)

Elevated Biodegradable Sunglasses
Re: Vision Announced They Have Been Working on a Secret Project