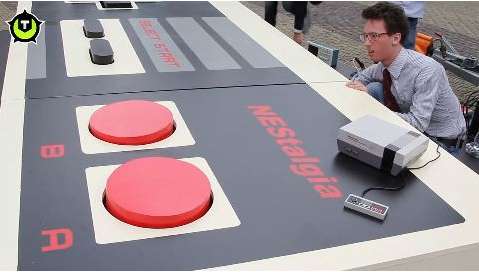 Created by Electrical Engineering students at Delft University of Technology, which is located in Delft, Netherlands, the world's largest Nintendo controller does not, unfortunately, qualify for a Guinness World Record status because no delegation was present. Nevertheless, it is still incredibly impressive. I'm sure that passersby thought so -- they were able to not only play a game of Tetris on an LED screen of over 6 square meters high, they were also allowed to jump on the controller as well.

The students chose to recreate the world's largest Nintendo controller in such a large size because it was the first commercially successful controller on the market and is also a pop culture phenomenon.
1
Score
Popularity
Activity
Freshness
Attend Future Festival Virtual