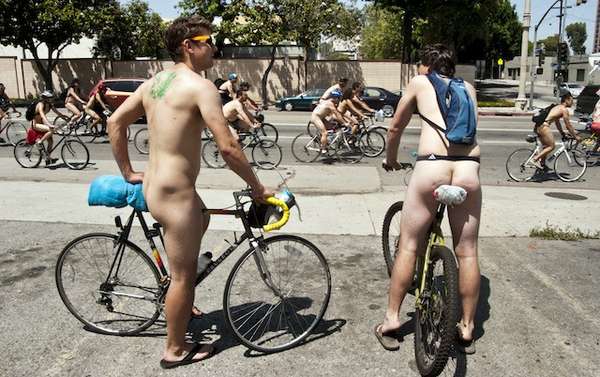 Sarah Robson — June 20, 2012 — Naughty
References: laist & laweekly
Share on Facebook Share on Twitter Share on LinkedIn Share on Pinterest
The world naked bike ride 2012 took place in Los Angeles, California on June 16, 2012. Hundreds of adventurous individuals participated in this specific event, and it is apart of the World Nake Bike Ride international event. The goal of this hilarious and gutsy event is to raise awareness of the dangers that face cyclists, to promote clean natural energy and to show the world's dependence on non-renewable energy sources.

The Los Angeles participants decorated their bodies with paint and revealed their goods to Downtown, Echo Park, Silver Lake and more. Naked bike rides have taken place all over the world and are catching on because they are for a good cause and are a fun way to spend an afternoon. Participating in any nude event sounds intimidating, but sitting on a bike at the same time must be a bit uncomfortable.