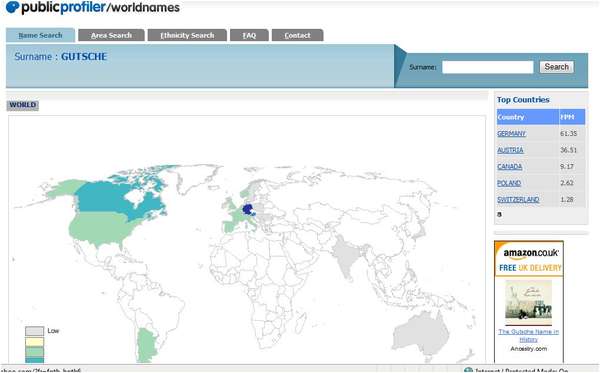 The researchers in the Department of Geography from University College, London are using onomap, a research methodology which allows “users to classify any list of names into groups of common cultural ethnic and linguistic origin using surnames and forenames.”

Their data (names and locations) are derived from publicly available telephone directories or national electoral rolls (2000-2005). They have data for about 300 million people in 26 countries. 8 million unique surnames and 5 million unique forenames are included.

As their coverage is not totally inclusive, some surnames may not reveal anything. A notable lack are Chinese surnames like Chan and Lim.  However it is fun to try for those of you lucky enough to have surnames already included.

The Gutsches, to no one’s surprise--including Jeremy’s--are most populous in Germany. Bianca’s namesakes are mostly in Luxembourg. Although Smiths and Jones are thick on the ground, the Smiths are more numerous in Australia whereas more Jones opted to stay closer to home, the UK. The Scottish diaspora can be seen by the MacDonald example.

LeBlanc is one of the most common French Canadian names - Canadian LeBlancs outnumber the number of LeBlancs in France. When the British expelled the Acadian French from Eastern Canada in the 18th century, many of them (including the LeBlancs) found their way to the US - the most populous area for LeBlancs in the statistics of this site is indeed Louisiana, Cajun country.
1.4
Score
Popularity
Activity
Freshness
Get the 2021 Trend Report FREE