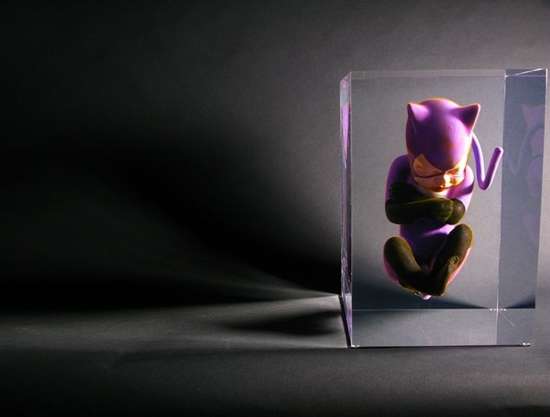 Senduran Bhakthakumaran — January 23, 2012 — Art & Design
References: bebe.doctissimo.fr & ufunk.net
Share on Facebook Share on Twitter Share on LinkedIn Share on Pinterest
'Wonderfoetus' by Alexandre Nicolas is a collection of resin-covered sculptures of the world’s favorite superheros. These representations are quite different than the regular renderings of the heroes, as they are Alexandre Nicolas’s interpretation of the crime-fighters in the form of fetuses.

An almost sophisticated and metropolitan look has been given to these specimens, which furthers their fragile infantile looks. The heroes presented in this collection are: Batman, Wonderwoman, Catwoman, the Invisible Man, Hulk, Superman, the Silver Surfer and Spiderman. The pieces are developed with precision to detail and Alexandre Nicolas has ensured the models are recognizable and not missing any features that would cause comic book fans to riot.