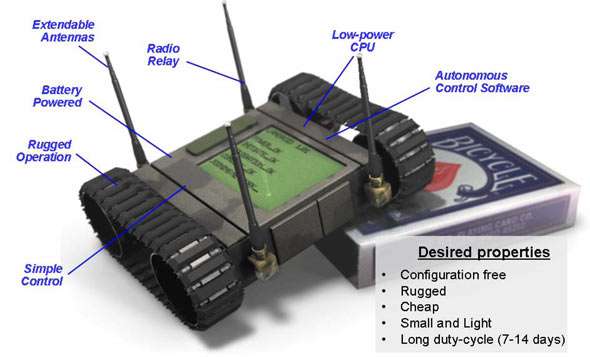 DARPA is developing tiny WiFi robots which extend wireless networks in battlefields. The robots will be particularly useful in caves, underground unkers and indoors where other forms of wireless become useless.

DARPA says: "The LANdroid robots, which will consist of a radio, robotic platform, battery, and small processor, will be expendable. Dismounted warfighters must be able to drop and go â€“ benefiting from the infrastructure while it is in place but not being required to move back into harm's way to retrieve the robots...the target is to demonstrate a platform that would have a final production cost of $100 per LANdroid at modest volumes (e.g., 1,000 units)."
2.8
Score
Popularity
Activity
Freshness
Attend Future Festival