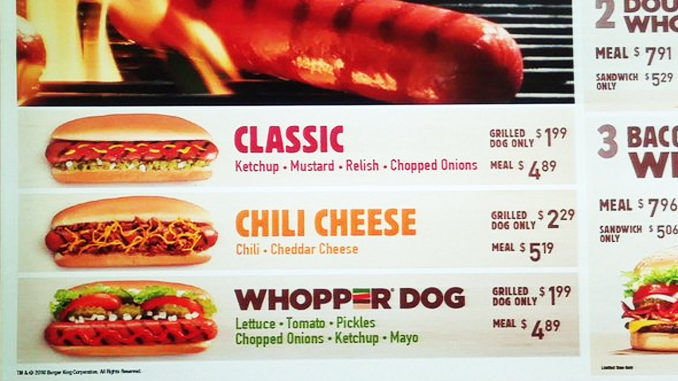 Katherine Pendrill — May 4, 2016 — Lifestyle
References: grubgrade & chewboom
Share on Facebook Share on Twitter Share on LinkedIn Share on Pinterest
According to recent reports, Burger King is currently testing a new version of its Grilled Dogs called the Whopper Dog. Since the chain introduced hot dogs to its menu back in February of this year, sales have been steadily increasing. Now the fast food joint is capitalizing on its success by adding a new option to its Grilled Dogs lineup.

The new Whopper Dog was spotted by an observant customer at a Burger King in Maryland. The new dish features the same Oscar Mayer 100 percent beef hot dog used to prepare the chain's other Grilled Dogs. However, the newest addition is topped with a tasty combination of lettuce, tomato, chopped onions, pickles and mayo. In other words, the new hot dog features the same ingredients as Burger King's iconic hamburger.

While it is unclear if the Whopper Dog will become a permanent menu addition, the new dish demonstrates that there is strong demand for Burger King's new Grilled Dogs.
4.9
Score
Popularity
Activity
Freshness
Jeremy Gutsche Keynote Speaker