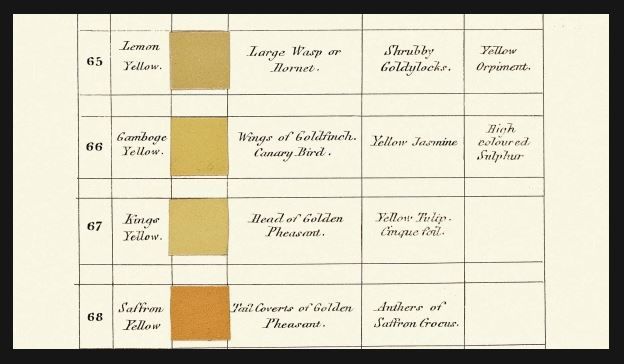 'Werner's Nomenclature of Colours' is Being Republished by Smithsonian Books

Joey Haar — January 30, 2018 — Art & Design
References: smithsonianbooks & fastcodesign
Share on Facebook Share on Twitter Share on LinkedIn Share on Pinterest
Elaborate, poetic names for colors are relatively common nowadays thanks to Pantone and other paint companies' decks of color swatches, but 'Werner's Nomenclature of Colours' shows that the practice goes back farther than one might imagine. The book, which was initially published in 1814 and is now being republished in facsimile by Smithsonian Books, features a broad array of standardized colors with names like Flax Flower Blue, Arterial Blood Red, and Velvet Black.

Not only does the book include color swatches and names for those hues, but it also includes information about how those colors can come into play into the real world. Its subtitle explains that it's "adapted to: zoology, botany, chemistry, minerology, [and] anatomy", so the book was clearly designed to be a tool for scientists as much as it is a beautiful work in and of itself. In fact, Charles Darwin used Werner's Nomenclature of Colours during his voyage on HMS Beagle.
1.2
Score
Popularity
Activity
Freshness
Access Advisory Services