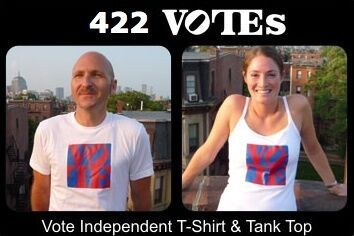 Sandra Winn — September 17, 2008 — Fashion
References: boston & voteapparel
Share on Facebook Share on Twitter Share on LinkedIn Share on Pinterest
Just in time for the November 2008 Presidential elections are Boston-based company, Vote Apparel, t-shirts and tank tops that allow you to wear your vote, without the names of the candidates (praise be the gods) or the party written anywhere on them. Instead, political party affiliations are represented by colors; white for Independent, green for the Green Party, blue for Democrats, and red for Republicans. Curiously missing is my favorite campaign-style t-shirt, “Vote for Pedro.”

Vote Apparel wants you to “Wear your vote. Let it be counted.” That it does, though not in the way one might be led to think.  When you purchase a tank top or t-shirt, depending on the party, a vote is displayed on the front page above the appropriate party.

Vote Apparel t-shirts and tank tops, which the Boston Globe deemed “Campaign Chic” are “Made in the USA” from 100% Baby Rib cotton.  They come in a variety of sizes and can even be bought in bulk.
1.1
Score
Popularity
Activity
Freshness
Get Trend Hunter Dashboard

19 Sly Stealth Innovations
Hiding Out in the Open, from Booze Dispensers to Spirituality