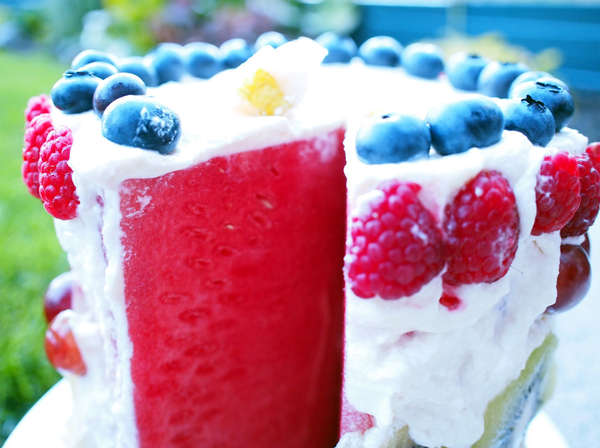 Meghan Young — July 31, 2013 — Lifestyle
References: instructables & neatorama
Share on Facebook Share on Twitter Share on LinkedIn Share on Pinterest
The Watermelon Cake by Mike Warren takes healthy summer treats to a whole other level. Unlike the DIY Watermelon Cake by Bird on a Cake, this one is made out of an actual watermelon in place of cake batter. People may have realized that something was slightly off about it at first visually.

Essentially, the watermelon for the Watermelon Cake by Mike Warren was cut into a large cylindrical shape to begin. It was then lathered in cool whip to mimic the look of icing and decorated with other fruits such as grapes, blueberries and kiwi. Warren even added some sliced almonds on the bottom for texture as well as taste.