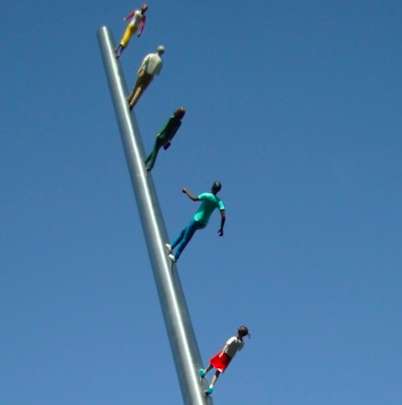 Jonathan Saunders' Walking to the Sky Series is Entirely Elevated

Jordy E — February 21, 2013 — Art & Design
References: borofsky & mymodernmet
Share on Facebook Share on Twitter Share on LinkedIn Share on Pinterest
Jonathan Saunders' Walking to the Sky series depicts a set of miniature stainless steel humans as they ascend upwards. These structures do so by way of a 30 meter high beam, one that the artist placed a stream of men and women upon.

Saunders' work has been of international appeal as the piece has been featured several times over in Korea, Dallas, Pittsburgh and Seoul. This comes of his universal messages. According to Saunders, the exhibit is representative of, "a symbol for our collective search for wisdom and awakened consciousness." As he challenges the staples of physics, he has certainly prompted viewers to think deeper and to reconsider one's daily assumptions, a principle that clearly runs central to Walking to the Sky.
1
Score
Popularity
Activity
Freshness
Jeremy Gutsche Keynote Speaker