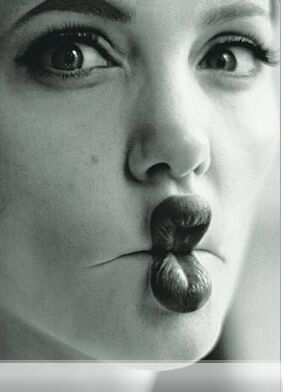 The cover shot is part of 21 photos of a much anticipated and talked about W Magazine feature that was photographed by Angelina Jolie’s partner, Brad Pitt.

Brad Pitt captured Angelina Jolie and their six kids back in August at the Chateau Miraval, the family’s French home.

So how did the idea come up? Iconic photographer Bruce Weber suggested to W’s Creative Director, Dennis Freedman, that in his opinion, the best pictures of Elizabeth Taylor were taken by her third husband, Mike Todd. Freedman pitched Pitt the idea of shooting Jolie, and that was it!

“I was surprised that Brad accepted the challenge,” says Freedman of Pitt’s enthusiastic response. “Last time we collaborated, I was struck by his sensitivity to the subtleties of photography. I knew that he possessed a highly tuned critical eye and would be very demanding of himself. Still, I wasn’t prepared for the beauty and intimacy of the images he made of Angelina and the children.”

However, it wasn’t easy to provide the material Brad Pitt demanded. He was set on shooting Angelina Jolie with Kodak Tech Pan film, which was discontinued four years ago. Photo editor Nadia Vellam was lucky enough to locate 40 rolls of the film on eBay, and when Pitt ran out, 30 more rolls where located and acquired in Israel and were instantly flown from Tel Aviv to France to finish the shoot.

I am sure with all the buzz and attention the magazine has been getting, the editors at W Magazine do not regret the trouble one bit. The November issue of W Magazine is out on October 21st and is sure to be a big hit.
6.1
Score
Popularity
Activity
Freshness
Jeremy Gutsche Keynote Speaker