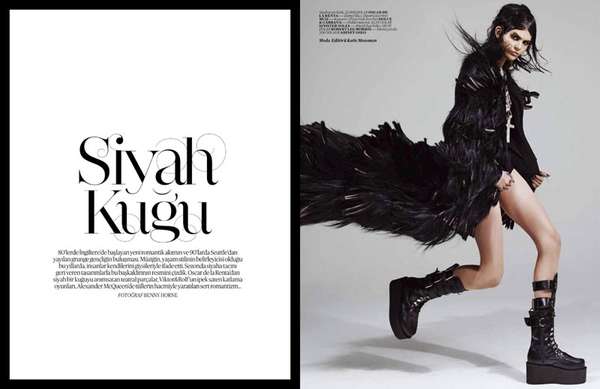 Meghan Young — October 12, 2012 — Fashion
References: vogue.tr & fashiongonerogue
If a princess ever decided to rebel against her royal parent and go Goth, the Vogue Turkey 'Siyah Kugu' editorial shows people what she would look like. Despite the greasy hair, smudged eyeshadow and dark attire, there is still an elegance to her demeanor that is hard to shake. It helps that this 'princess' rocks some stunning gowns and other regal pieces in addition to menacing accessories and chunky footwear.

The Vogue Turkey 'Siyah Kugu' editorial was shot by photographer Benny Horne. It stars model Melissa Stasiuk. Appearing in the October 2012 issue of the magazine, the Argentinian beauty was styled by Katie Mossman. She was clad in pieces from the likes of Versace, Alexander McQueen and Gucci.
6.8
Score
Popularity
Activity
Freshness