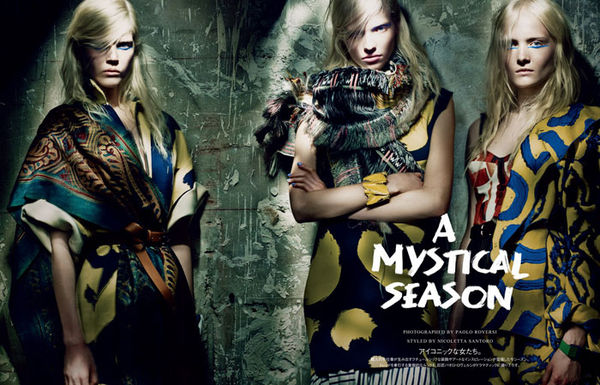 The Vogue Japan 'A Mystical Season' Photoshoot is Eclectic and Eccentric

Meghan Young — January 31, 2014 — Fashion
References: vogue.co.jp & models
Share on Facebook Share on Twitter Share on LinkedIn Share on Pinterest
The Vogue Japan 'A Mystical Season' editorial is so dark and mysterious, a person might not even focus on the fashion right away. Instead, they would find themselves soaking up the arcane allure of the images, which borderline on tribal. Yet once the overall ambiance is full absorbed, people will be surprised to note just how esoteric the fashion featured throughout is.

Styled by Nicoletta Santoro, the Vogue Japan 'A Mystical Season' editorial showcases pieces from the likes of Céline, Prada, Marni, Givenchy and Dries Van Noten. She follows a theme of vibrant colors, bold prints and eclectic textures with an urban twist. Modelled on Maja Salamon, Ola Rudnicka and Sasha Luss, the looks are eccentric yet elegant.