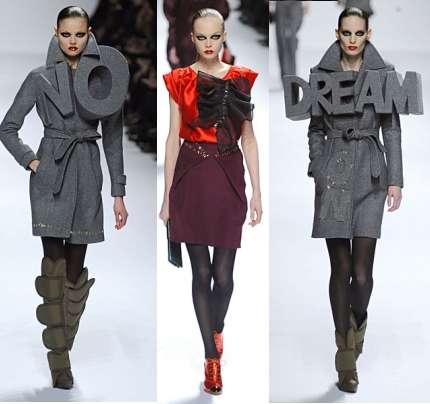 mediterranean — February 28, 2008 — Luxury
References: catwalkqueen
Share on Facebook Share on Twitter Share on LinkedIn Share on Pinterest
Viktor & Rolf started their Paris catwalk show with a surreal grey coat sporting an eye-popping enormous 'NO' slogan. The insistent "No!" was just one of a series of messages in which the creative Dutch designers tried to encapsulate their thoughts in words, fashion and the music soundtrack. Along with 'Wow' and 'Dream on', the word 'No' was also painted onto models' faces and emblazoned on belt buckles and T-shirts.

"It's a glamorous protest - no to fast fashion; no to stitching. We think it's a sexy attitude to say no," said Viktor Horsting and Rolf Snoeren backstage, referring to the fact that outfits were often made with staples, rather than seams, and the tiny strips of gilded metal formed patterns at the hem and, maybe, held things together.

If you are shy and just can't say no... now you can just wear it, loud and clear.
5
Score
Popularity
Activity
Freshness
View Innovation Webinars