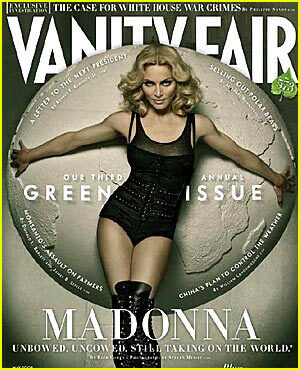 For its 2008 Green Issue, Vanity Fair has teamed up with the Queen of Pop herself.

Madonna is seen on the upcoming issue's cover in a shoot by photographer Steven Meisel. That's the same guy who shot Madonna's infamous Sex book back in the '90s.

In a smart reference to her current hit song with Justin Timberlake, "4 minutes (To Save The World)," Madonna is seen protectively holding a globe of our earth and trying to save the world. How does she do it? Well, do not wear pants >> less laundry >> save the environment >> save the world.