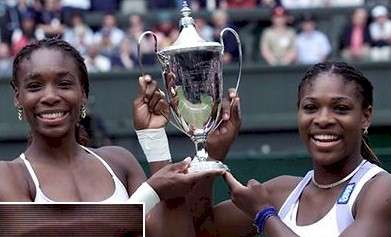 Venus & Serena Face Off at Wimbledon

Bianca — July 3, 2008 — Lifestyle
References: sportsillustrated.cnn
Share on Facebook Share on Twitter Share on LinkedIn Share on Pinterest
Wimbledon was already getting tremendous hype in the media, but now that Venus and Serena Williams are set to play each other, things are about to get even hotter. Both sisters won their matches yesterday which means that the final games will pit the Williams sisters against each other for the third time. Will this lead to the ultimate in sibling rivalry?

“Our main focus is obviously both of us getting to the final,” Venus, 28 said. “Then, from there, it’s every Williams for themself.”

“I personally want everything that Venus has,” she said. “We’re good at this now. We just leave everything on the court. This is the finals of Wimbledon. Who doesn’t want it?”

Venus’ hitting partner, David Witt said, “They’re both going to show up, and they both want it,” adding, “So it’s special.”

Hopefully things wont’ be awkward after the match; after all, the two of them share an apartment, so that would be some pretty strong tension at home! I guess this is one roommate scenario where the parents can’t take sides with their child.
1.9
Score
Popularity
Activity
Freshness
View Innovation Webinars