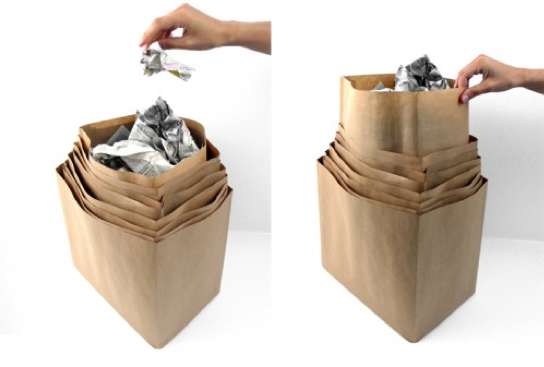 The Vanishing Bin Scraps the Tediousness in the Disposing of Trash

Amelia Roblin — January 26, 2012 — Eco
References: bezaprojekt.pl
Refilling garbage cans with fresh bags is something that most independent and civilized people do, so it's surprising that few designers have come up with an adequate system for making this common activity effortless.

The Vanishing Bin by Beza Projekt makes a very simple suggestion that is actually quite clever. The object is assembled of layered brown paper bags which nestle one inside the other for an initially structured form. When the inner trash bag becomes full, one needs simply pull it from the sack which surrounds it, uncovering an empty receptacle beneath.

Each subsequent layer of the Vanishing Bin exposes increasingly larger flat folded eco bags. So even though its layered composition may look excessive, it actually lessens the impact of your waste and reduces your runs throughout the house to collect and replace garbage bags.
2.1
Score
Popularity
Activity
Freshness