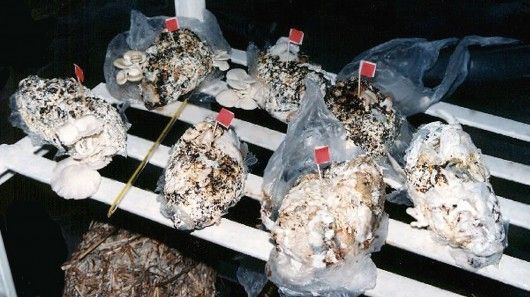 Rahul Kalvapalle — September 4, 2014 — Eco
References: alphagalileo.org & gizmag
Share on Facebook Share on Twitter Share on LinkedIn Share on Pinterest
Scientists at Mexico's Autonomous Metropolitan University in Azcapotzalco have found a way to utilize used diapers to grow mushrooms. As gross as that may sound upon first mention, it actually represents a sustainable way to grow mushrooms and cut back on disposable diaper dumping.

The project only uses used diapers containing liquid waste (no poo), and sterilizes them in an autoclave. The diapers are then ground up and mixed with a special chemical to create a new material. Fungus spores are then spread on this diaper-based material and placed in a plastic bag held for two to three weeks in dark conditions with controlled humidity and temperature, before eventually being exposed to light.

The spores then develop into mushrooms that feed on the cellulose present in the diapers. After a period of 2-3 months, the diaper itself degrades and becomes 80% smaller and lighter.

The main aim of the project is to cut back on diaper waste. However, the mushrooms could be used as food supplement for cattle -- they aren't expected to top your pizza any time soon.
4.8
Score
Popularity
Activity
Freshness
Get Better and Faster