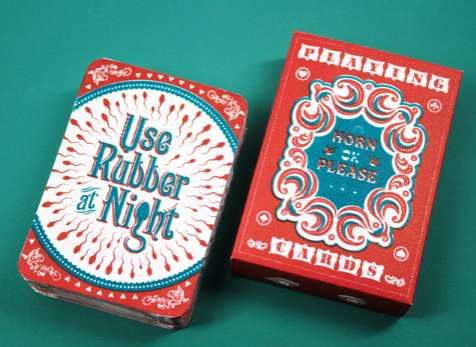 'Use Rubber at Night' is Aimed at India's Truck Drivers

Marie C. Hudson — January 21, 2012 — Lifestyle
References: shantanusuman & thedieline
Share on Facebook Share on Twitter Share on LinkedIn Share on Pinterest
The misconception that AIDS is only a threat sex workers and those involved in non-heterosexual relationships is a thing of the past, and the rising number of those affected in certain parts of the world begs for new and creative ways to address the issue, like the 'Use Rubber at Night' playing cards.

Graphic design student Shantanu Suman developed the Use Rubber at Night deck as a way to bring safe sex awareness to truck drivers in India, where over 5.1 million people are living with AIDS. After reading a study by the Center for Media Studies indicating that truck drivers are one of the country's largest groups of AIDS carriers, Suman sought out a way to address the issue directly. "The fact that cards games are the most common recreational activity among the truckers in India, led to the inception of this set of playing card design," explains the designer on his website. Changing the common truck driver phrase, "Use dipper at night" to fit the cause, Suman was able to get the message across in a simple and direct manner.

With a clever name and complex designs that can be appreciated by all, Use Rubber at Night is a thoughtful and practical way to address a very serious, but preventable problem around the world.
2.2
Score
Popularity
Activity
Freshness
View Innovation Webinars