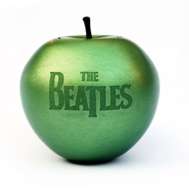 But no, it’s not just a boring MP3 player as you may think. Instead, it’s a 100 percent, awesome music collection of songs from the legendary band. With a 16GB memory, the adorable Granny Smith has 14 songs including ‘Help!,’ ‘Yellow Submarine’ and ‘Let it Be,’ as well as some rare old pictures.