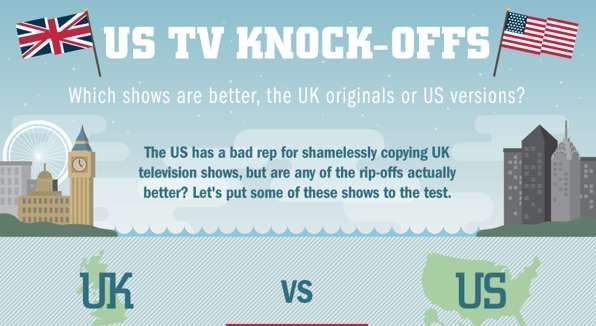 The 'US TV Knock-Offs' Infographic Compares The Office and More

Marie C. Hudson — August 27, 2011 — Pop Culture
References: confused & onlyinfographic
Share on Facebook Share on Twitter Share on LinkedIn Share on Pinterest
The controversial competition of Ricky Gervais versus Steve Carell as ultimate boss of The Office is addressed in this 'US TV Knock-Offs' infographic, which asks, "Which shows are better, the UK originals or US versions?" Designed by Confused.com, the chart pits the most popular American adaptations of British TV series against their precursors.

While I am a stickler for original programming, I had to admit a lot of these American versions do beat out the UK shows. As the chart shows, the U.S. versions of American Idol, Queer as Folk and The Apprentice have definitely stolen the focus from their originals. On the other hand, the British Skins might be one of the greatest TV shows of the last 10 years, while the U.S. version saw an early cancellation.

Whether you're a huge TV buff or you prefer to stream your fave shows online, this 'US TV Knock-Offs' infographic is extremely interesting and has the facts to end all your friendly series debates.
4
Score
Popularity
Activity
Freshness
Access Advisory Services

Hipster Mixtape Stats
‘By The Numbers: The Weeknd's Thursday' Breaks Down New Al