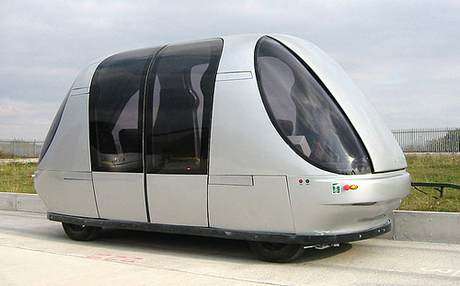 IdeaMan — February 28, 2008 — Autos
References: atsltd
Share on Facebook Share on Twitter Share on LinkedIn Share on Pinterest
Like something straight out of the Jetsons, except the cars don't fly, the new ULTRa is poised to be the latest advance in public transport systems. ULTRa, which stands for Urban Light TRansport, was developed by Advanced Transport Systems (ATS), Ltd., in association with the University of Bristol, to provide efficient personalized public transportation with little or no waiting time. The system consists of a fleet of driver-less electric vehicles that follow a network of guided routes, which can be located at street level, or above or below ground. The first system is currently being constructed at London's Heathrow Airport, with service expected to begin in late 2008, and additional systems are planned for the Netherlands and Belgium.

Stations will be located at convenient intervals, similar to bus stops. According to the company's website, â€œAt each station there are a series of berths at which passengers can enter a pod and each has a destination selection point. Selecting a destination is done by using a smart card and a touch screen. Each passenger can be identified by their smart card so the service can be personalised to respond to passengers' individual requirements.â€

The ULTRa system is also much more environmentally friendly than cars or buses, using less than half the energy and boasting very low overall emissions. However, it is not expected to completely replace train or bus transportation systems, which are better suited for long distance travel. ULTRa is designed primarily for short, local trips, hence the "urban" part of its acronym.

19 Techtastic Trains
From Bottoms Up Transit to Turbocharged Monorails