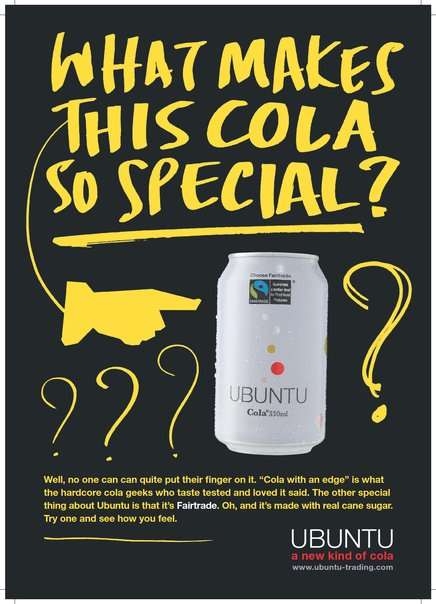 Ubuntu Cola is a First for the United Kingdom

Tiana Reid — October 26, 2010 — Social Good
References: ubuntu-trading & clearlyso
Share on Facebook Share on Twitter Share on LinkedIn Share on Pinterest
Ubuntu Cola is inspired by the classical African concept of Ubuntu, which is an ethical philosophy focusing on humanity and kindness. Following in the vein of caring for one another, Ubuntu Cola is certified by the Fairtrade Foundation, which is a United Kingdom-based charitable organization which focuses on improving the livelihoods of the poor in developing countries. It is because of this that Ubuntu is the first cola company in the United Kingdom to be fair trade certified.

The sugar for the cola comes from cooperatives in Kasinthula, Malawi and Kaleya, Zambia. At the Kasinthula fair-trade cooperative, the members receive an average of $4 a day, which at first glance, doesn’t sound like a lot, but is in fact six times the average income of a Malawian. In addition to offering fair prices for sugar producers, Ubuntu puts a minimum of 15 percent of its yearly profits back into what is called the Ubuntu Africa Programme, which ensures the success of the farmers and their communities by encouraging entrepreneurship and innovative ways to reduce poverty.

In preparation for its launch, the Ubuntu Trading Company did marketing research in order to create the ideal product. Ubuntu Cola comes in three different forms: a 500 milliliter PET plastic bottle, a 275 milliliter glass bottle, and a 330 milliliter can similar to traditional soda containers. Currently selling in Scandinavia and the United Kingdom, Ubuntu Cola’s main demographic is young professionals, housewives and students. Ubuntu has a strong personality, amazing flavor, refreshing taste and a social aspect that is completely antithesis to what you typically associate with companies like Coca Cola or others in the beverage industry. By bringing the fair trade movement to the soda market, Ubuntu Cola is raising awareness about how fair wages can dramatically change lives.