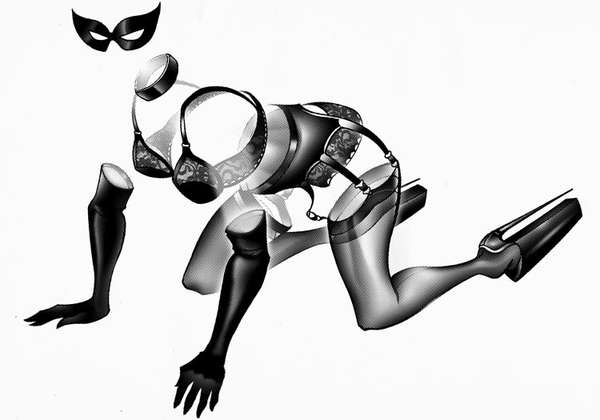 Jason Soy — February 24, 2012 — Fashion
References: tysonmcadoo & juxtapoz
Share on Facebook Share on Twitter Share on LinkedIn Share on Pinterest
It’s difficult to showcase Tyson McAdoo’s illustrations without slapping black bars onto the pictures to cover up nudity, which is a real injustice to his work. Luckily, he’s also rendered a series depicting a transparent woman in seductive poses, which can readily be viewed even with kids around.

Tyson McAdoo titles this series ‘Invisible,’ and it features floating lingerie that’s been filled out and put in steamy positions you’d expect from pin-up models. The proportions of the invisible lady have been exaggerated to highlight the provocative curves of the female form. It's impossible not to mention the massive high heels she’s rocking, which look as though they’re miniature top hats being worn on the feet. McAdoo finishes the titillating ensemble with sultry gloves, stockings and a kinky mask.

If you find these Tyson McAdoo drawings a little too hot to handle, wait until you see the rest of his portfolio.
5.1
Score
Popularity
Activity
Freshness
Get Trend Hunter Dashboard