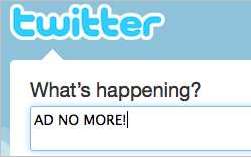 Joanne Lam — May 27, 2010 — Tech
References: twitter & newsfeed.time
For those who have depended on the large-scale micro-blogging company to promote and advertise products and/or services, Twitter removing third-party advertising from their site is news that may come as quite a hit.

According to Time News Feed, Twitter’s chief-operating officer stated that, “Aside from Promoted Tweets, we will not allow any third party to inject paid tweets into a timeline on any service that leverages the Twitter API.” Unfortunate for advertisers, but on the bright side, users will no longer have annoying ads clogging up their feeds!
1.7
Score
Popularity
Activity
Freshness