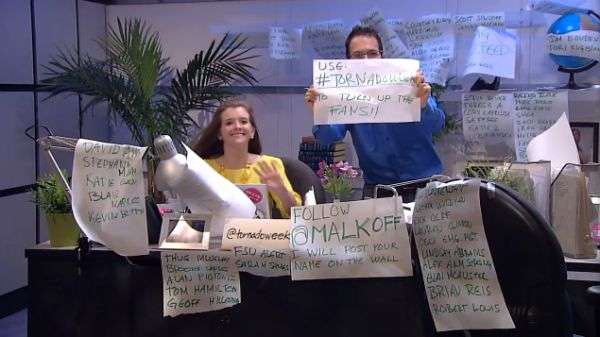 Meghan Young — May 1, 2013 — Unique
References: weather & neatorama
Share on Facebook Share on Twitter Share on LinkedIn Share on Pinterest
To ring in Tornado Week, which hasn't gained as much of a following as Shark Week, the Weather Channel has created the Tweet Powered Tornado. It is an interactive air-blasting phenomenon that subjects two lowly interns to a simulation of the real thing. Essentially, the more people tweet with the Tornado Week hashtag (#TornadoWeek), the stronger the force of the wind becomes. A hilarious concept, the Tweet Powered Tornado creates a fun experience.

Not only is the Tweet Powered Tornado entertaining to engage in, there is an end goal that people can strive to reach. The masterminds behind the concept write, "Hit 1,000,000 mentions and we will turn up the wind for a full blown EF-5 tornado inside the Weather Channel offices!" Let's get tweeting, people.
0.4
Score
Popularity
Activity
Freshness
Get Better and Faster