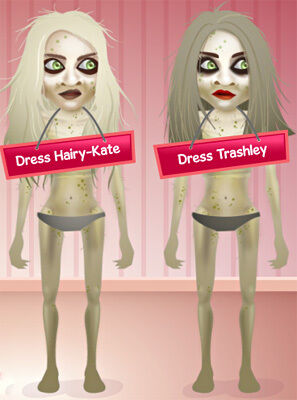 Lauren G — December 14, 2007 — Celebs
References: peta2
Share on Facebook Share on Twitter Share on LinkedIn Share on Pinterest
PETA has launched a website called 'Meet the Trollsen twins' on which they have renamed the Olsen sisters, "Hairy-Kate" and "Trashley". The site has a 'Fatal Fashion' interactive dress-up section, complete with pools of blood. My personal favourite, however, is the video parody of a Full House episode re-edited with graphic shots of animal cruelty.

PETA claims they are going after Mary-Kate and Ashley Olsen because they have "Ignored pleas to stop wearing fur and using it in their fashion collection".

Dan Shannon, assistant director of youth campaigns for peta2 said, "No one would argue that Mary-Kate and Ashley could use some meat on their bones, but the last thing they need is hair on their backs - especially when it belongs to someone else."

An advertising campaign will reinforce the trashing, with a billboard stating "Fur Is Worn By Beautiful Animals and Ugly People" that will be launched opposite the twins' star on the Hollywood Walk of Fame.