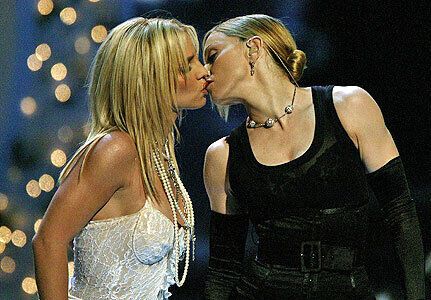 Britney Spears is currently working on a new album, spending her days in the studio, but surely she can make time to join Madonna’s Sticky & Sweet world tour, which kicks off in Cardiff on August 23. We already mentioned they would be collaborating, but getting Justin involved too would make it even more intense.

“Madonna is always trying to raise the bar and Britney and Timberlake on the same stage would be perfect,” a source told the Sun.

“They have both been asked but I think both are a bit reluctant. Britney would find it all a bit emotional and JT might not fancy it.

“More likely is that they both appear on different dates.

“But if anyone can make this happen it’s Madonna.”

Maybe Madonna will get Britney to kick her partying habits and throw in a few fitness tips before they go on tour… if she was able to chisel away and rediscover the Britney Spears the world fell in love with, it could be the career boost of Britney’s lifetime.

At first there were rumors of Britney making a “virtual appearance,” but the real thing would rock even more. She’s already filmed a cameo for the tour which will projected on a screen behind the stage. The gallery shows a few stills from the production process, which was filmed in an elevator.