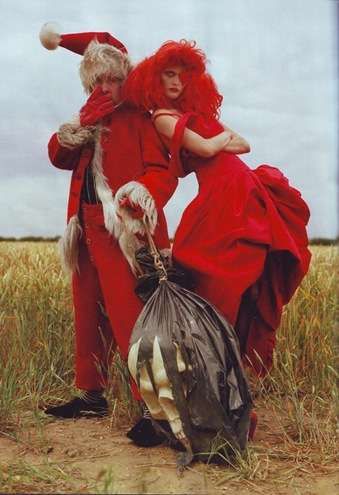 Marissa Liu — September 17, 2009 — Fashion
References: harpersbazaar & r1ma.blogspot
Share on Facebook Share on Twitter Share on LinkedIn Share on Pinterest
In anticipation of his retrospective at New York’s MOMA and just in time for Halloween, Harper’s Bazaar and Tim Burton collaborated for a fashion editorial entitled ‘Tricks and Treats.’ The shoot appears in the October 2009 issue of the magazine. Photographed by Tim Walker and starring models Malgosia Bela, Evelina Mambetova and Sophie Srej, Burton reimagines the Fall 2009 collections in his trademark style. Burton uses black and red fashions from Rodarte, Louis Vuitton, YSL, Alexander McQueen, and those infamous Nina Ricci platforms to set a fantastic and macabre scene.

For the Harper’s editorial Burton’s tricks and treats include models dressed up as some of his most famous characters like Edward Scissorhands and interacting with a giant skeleton. Tim Burton himself appears twice in the editorial, once as a mischievous Santa and again, clad in the shoot's only non-red or black number.
3.1
Score
Popularity
Activity
Freshness
Get the 2021 Trend Report FREE