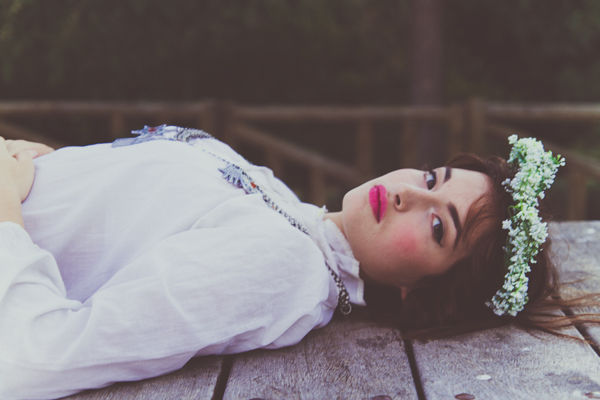 Anne Booth — September 23, 2013 — Art & Design
References: behance.net & behance.net
Kemê D is a photographer from Spain who has created beautiful tribal photos focusing on the end of summer called: 'Prayer of dreamer I.' The woman within the photos wears free-flowing white dresses and blouses, with tribal makeup painted across her face.

The accessories are also tribal-inspired as she has feathers in her hair, flower crowns, jingling belts and chunky necklaces. The soft sunset colors coming from the background create beautiful lighting within the photos. There is also a poem written at the end of the photo shoot saying: "We will keep the sun/summer is ending/all those women and their whispers/(hair as bedsheets)/walking on tiptoe not to wake us/ when we are not sleeping."

The poem describes the longing for summer to last, where the last picture expresses this as the model holds her hands up to the sky, as if she is capturing the sun. The photo shoot creates a beautiful narrative where the tribal photos mourn summer's end.
2
Score
Popularity
Activity
Freshness