A New Wave in Furniture
Next
Set of
Related
Ideas 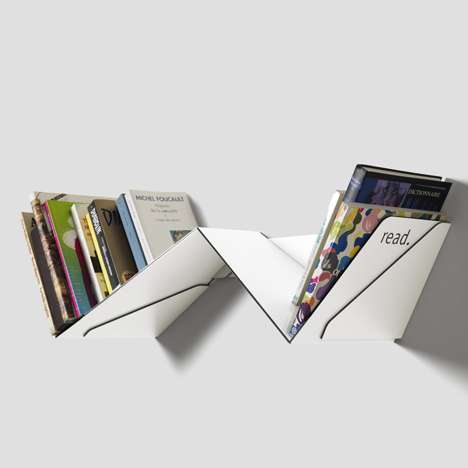 The Transitory Bookshelf Lets You Know What's Been Read

Andrew Robertson — April 17, 2012 — Art & Design
References: dezeen & blog.leibal
Share on Facebook Share on Twitter Share on LinkedIn Share on Pinterest
Just like the IN Pile and the OUT Pile that you have at your office, the Transitory Bookshelf designed by Robert Stadler helps you keep track of what's already been accomplished and what remains to be tackled. Bookshelves are a personal favorite of mine, whether it's my own or a friend's, there is something endearing about peering into a collection of literary adventures, reminiscing over past reads and contemplating over which ones to embark on next. However, as time goes on and your collection builds while your memory fades, how does one keep track of the accumulating books?

The Transitory bookshelf is composed of undulating triangles, on one side the shelf says "Read!" and on the other it says "Read," letting you know what you can lend out and what you need to dive into.
1.8
Score
Popularity
Activity
Freshness
Get Trend Hunter Dashboard