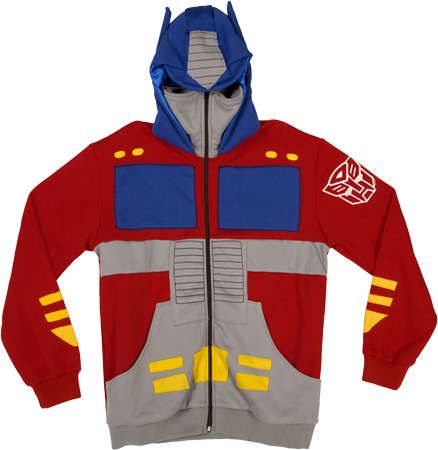 While many people familiar with the Transformers movies will readily identify with the Optimus Prime hoodie, being that he gets a lot of screen time as the leader of the Autobots, it's the Grimlock hoodie that's really going to strike a chord with die-hard fans.

For those unfamiliar with Transformers lore, Grimlock is the leader of the Dinobots -- a branch of the Autobots that can change into robot versions of powerful prehistoric creatures. Fans love him mainly for his brash attitude and monosyllabic way of speaking, which, as it turns out, is quite comical to listen to. Actually, even if you've who never heard of the Autobots or Transformers, you're probably going to fall in love with this hoodie because it makes you look like a freaking robotic tyrannosaurus rex!

Both Transformers Hoodies are available at 80s Tees for about $60 a pop -- a small price to pay to become the Dinobot King.