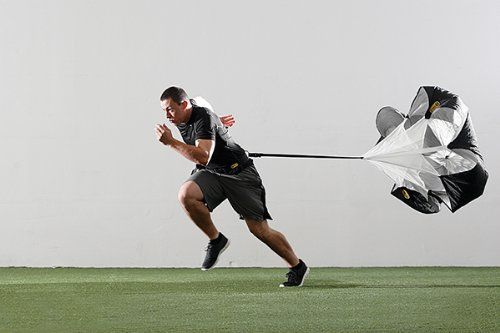 The SKLZ Speed Resistance Training Parachute is Key for Training

Thomas Wade-West — September 30, 2013 — Lifestyle
References: dudeiwantthat
Share on Facebook Share on Twitter Share on LinkedIn Share on Pinterest
The SKLZ Speed Resistance Training Parachute is the go-to for athletes looking to increase their overall speed and stamina, among other things. The chute is unlike a regular parachute in that it is of course smaller, but specifically engineered to remain untangled during usage.

This training parachute is built to increase three major areas of strength training: speed, stamina, strength and acceleration. A quick-release buckle can be adjusted for certain situational moments (i.e. mid-strides), that will help the athlete adapt to that scenario come game time. The built-in mesh panels keep the strings from ever tangling, and stabilize the chute on both sides. The rotation belt is not only fit for a diverse set of waists, but is also equipped with a 360 degree range of motion.

The SKLZ Speed Resistance Training Parachute is the go-to for training athletes; given that this device adds approximately 15-30 lbs of resistance per workout, you will be training similarly to the professionals.
2.2
Score
Popularity
Activity
Freshness
Attend Future Festival