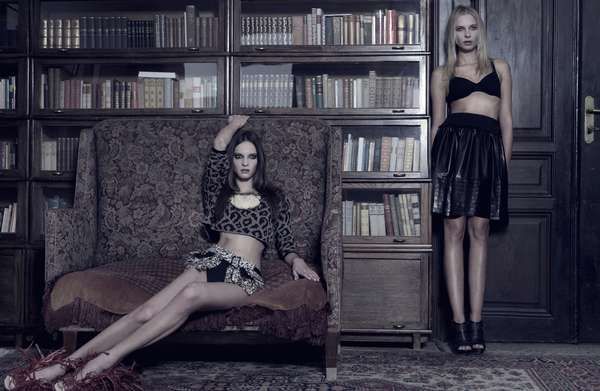 The Time at Home Series is Rock-and-Roll Yet Regal

Meghan Young — August 23, 2011 — Fashion
References: philippjelenska & behance.net
Share on Facebook Share on Twitter Share on LinkedIn Share on Pinterest
There is something darkly rock-and-roll, yet regal about the Time at Home photo series. As though following two modern princesses or heiresses, this edgy shoot entices the viewer, making them wonder who exactly these two obviously important women are. Of course, the result is that viewers want to be like these mysterious models.

Shot by Vienna-based fashion photographer Philipp Jelenska, who was assisted by Viktoria Morgenstern, the Time at Home photo series is tastefully sensual. This is in large part due to the expert styling of Yoan Gonfond from PerfectProps, who managed to execute sexy looks that were not overtly so. Dripping in tons of patterns, textures and skin-revealing looks, models Alena and Kat channeled their inner elegant versions of vixens. The entire look worked perfectly thanks to some sultry hair and makeup done by Thomas Orsolis.
5.6
Score
Popularity
Activity
Freshness
View Innovation Webinars