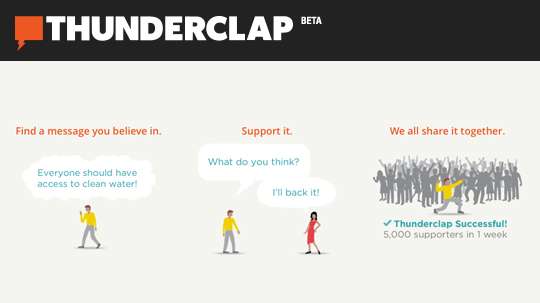 Thunderclap Will Help You Mass-Share a Single Message

Katherinev123 — July 5, 2012 — Pop Culture
References: thunderclap.it & digitalbuzzblog
Share on Facebook Share on Twitter Share on LinkedIn Share on Pinterest
Sending a message in a large group is always more powerful than if sent from one person, which is why DE-DE, agency Droga5's development studio, created Thunderclap. Thunderclap is the world's first crowdspeaking platform, a tool that allows users to mass-share a single message to a large number of people simultaneously. As Thunderclap's website points out, by sending out a "signal" at the same, one single person can spark action in an unprecedented way.

Thunderclap can be used for a variety of messages, such as ending unpaid internships, raising awareness for a nonprofit organization or simply spreading information and news on a product. Once the message receives support from enough people, Thunderclap will amplify it for you by spreading the message on Facebook. According to its site, Thunderclap has already reached millions of people in this way.
1.4
Score
Popularity
Activity
Freshness
Get Better and Faster