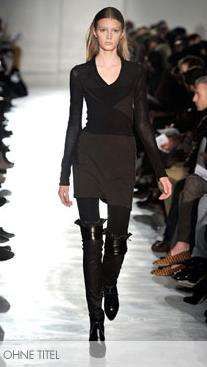 Well, with the Fall 2009 fashion shows, this mythical creation became a reality and, to that end, a fashion phenomenon. Ohne Titel, Rodarte and Yigal Azrouel all showed black thigh-high leather boots, while Stella McCartney’s Fall 2009 show offered up a patterned version of the bondage boot.