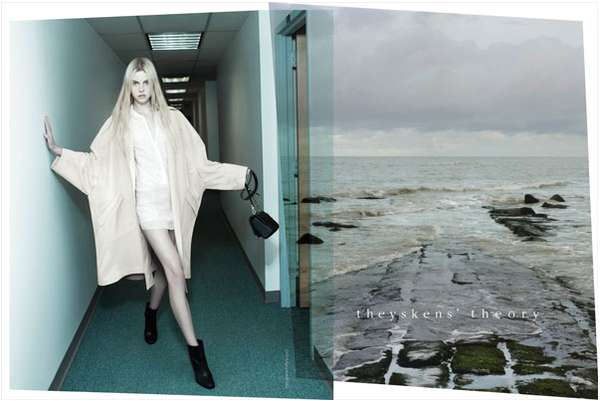 Meghan Young — January 25, 2013 — Fashion
References: theyskenstheory & refinery29
Share on Facebook Share on Twitter Share on LinkedIn Share on Pinterest
The Theyskens' Theory Spring 2013 ad campaign takes a dark and moody route instead of the typical warm and sunshiny one the upcoming months often inspire. Nevertheless, it does capture the essence of the rainy season beautifully. More than that, it was shot at a location that holds much meaning to the designer. Olivier Theyksens reveals, "[I]t is the shore of my country and I find it beautiful.[...] I wanted the image of a place more charged with emotions."

Lensed by Willy Vanderperre and starring model Wylie Hays, the location of the Theyskens' Theory Spring 2013 ad campaign is appropriate for another, less sentimental, reason. The clothing itself was inspired by pictures from Guido Mocafico of jellyfishes shot in the deep sea, hence the seaside theme.
4.5
Score
Popularity
Activity
Freshness
Access Advisory Services